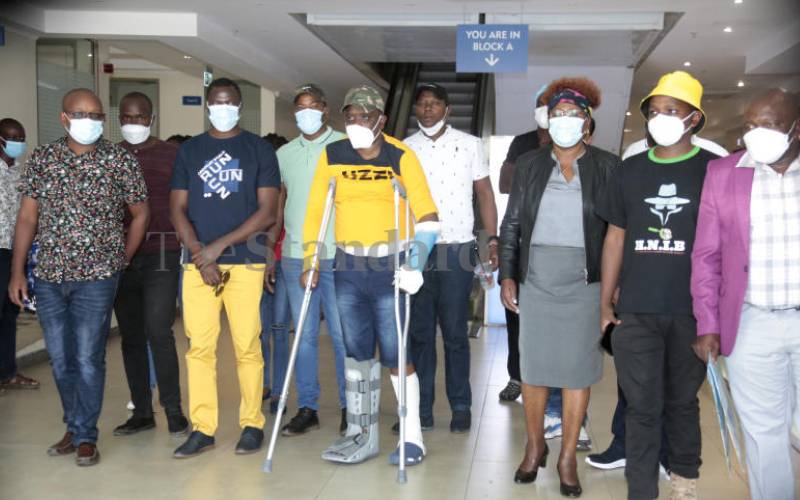 Vice President William Ruto’s digital strategist Dennis Itumbi limped out of the hospital yesterday where he has been bedridden for a week.

After being released from Nairobi West hospital, Itumbi, who was with MPs Ndindi Nyoro (Kiharu), Alice Wahome (Kandara) and Nixon Korir (Lang’ata), claimed the attack was orchestrated by police trying to silence dissenting voices.

He hit his captors down stating that he will reveal the information he has on them once he recovers.

To the few rogue police officers who think they can control political options by maiming, injuring and hitting people, this is my message; you didn’t do anything, Itumbi said.

This heinous incident was actually orchestrated by the same government that we pay taxes to protect ourselves, Nyoro said.

When asked if they had any evidence for their claims, Itumbi said, They might have thought that everything they had done was secret, but the Hustler Nation’s Bureau of Investigation didn’t was not silent. We have the evidence. ”

Along with his compatriots in the United Democratic Alliance (UDA), Itumbi has vowed to reveal intelligence linking police forces to the attack and kidnapping when he attends a church service in Kirinyiga County in February.

The voice blogger was kidnapped from a hair salon along Kiambu Road on December 23 and found naked and beaten that evening in Lucky Summer, Nairobi.

When I arrived here 10 days ago, I was in a lot of pain. I couldn’t even open my eyes. In fact, I didn’t think I would be here and address you, Itumbi said.

Itumbi’s doctors said he was admitted with multiple injuries, including a broken finger, a broken right leg and right hand, and an injury to one of his eyes.